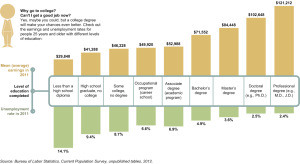 The New York Times’ David Leonhardt wrote an analysis of studies that overwhelmingly show that college brings a large return to the vast majority of students who attend it.

Leonhardt makes the case in a series of columns that looks at new data that says “For all the struggles that many young college graduates face, a four-year degree has probably never been more valuable.”

In fact, he cites statistics that indicate Americans with four-year college degrees made 98 percent more an hour on average in 2013 than people without a degree. That’s up from 89 percent five years earlier, 85 percent a decade earlier and 64 percent in the early 1980s.